Last November I went to Ashton-under-Lyne to visit a forum friend who had just hatched out some gorgeous little chicks.  Oh they were so beautiful!  Lynda very kindly loaned me her incubator - not that I was thinking of hatching any myself at that time you understand.  I think really she wanted it out of the way so she wouldn't be tempted to hatch any more just now. Anyway, one day in January, I was browsing eBay in the chicken equipment section and saw a 30cm trough feeder and I thought that I could really do with another feeder for my girls.  Now you'll see that I typed 30cm, but in my mind I'd got my centimetres and inches mixed up, so when the trough arrived in a little box I thought "Oooooops!".  Perhaps I was subconsciously preparing for "something".  I'd been looking at pictures of different breeds of chickens on the internet and really liked the look of Welsummers.  Beautiful plumage, big enough "for the table" and lay really deep brown eggs.  Another friend close by also has Welsummers, and when I saw her "boys" I fell in love.
On Wednesday February 11th I went to Penkridge market where they have a poultry auction "just to have a look and see what was available".  My heart flipped over when I saw on the table of fertile eggs a box containing 12 Welsummer BF (believed fertile) eggs.  It just happened!  Honestly!  At 1pm I was the proud and very nervous owner of 12 potential chicks.  The eggs were stored for a day to get them up to room temperature before putting them in the incubator.  Then followed 18 days of turning them regularly, making sure the humidity was right, and feeling very excited.  On day 20, Ebony (my cat) was showing lots of interest in the incubator so I thought it would be a good idea to move it into the converted vivarium that I was to use as a brooder box.  Oh dear!  The temperature shot up to over 40 degrees celcius and the humidity was way down.  I was convinced that I'd killed all the little ones but I moved them back into the kitchen and sorted out the heating and moisture.  Then I saw that 1 egg had pipped (the chick inside trying to break out) at just after 3pm.  By 5 pm I could hear cheeping coming from the egg.  To say that I was more nervous than I was when my first grandchild was about to be born is an understatement!  I was so stressed, worried, excited, nervous, loads of emotions.
I was like that for 24 hours when as I was checking yet again if anything had progressed another chick bashed a huge hole in its shell and within 10 minutes it had hatched, closely followed by the first pipped one. 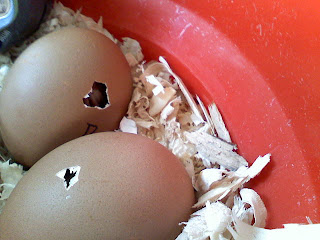 2 very healthy little chicks who I thought were both girls until they dried out properly and I discovered that I'd got 1 boy and 1 girl.  I'd already called them Blossom and Petal, but Blossom is such a daft name for a boy so he's now called Rowan.
Later on that evening another 3 eggs pipped but by 9.30pm I was feeling so ill that I decided to go
to bed and see what had happened later on during the night.  At 1am 1 of the chicks had just hatched and another 3 were on their way.  I left them to it and went back to bed.  It was wonderful at 5am lifting the lid of the now very
quiet incubator to see 4 little heads looking up at me and start cheeping.   So then there were 6 little ones in the brooder, cheeping madly, drinking, trying to stand without wobbling, climbing over each other and falling asleep mid-step.  During the morning another egg pipped and hatched exactly 24 hours after the first one.  I candled (looked through the eggs with a torch) the remaining 5 eggs and could see that there wasn't any babies in 4 of them but no movement or any indication of life in the other one.  I decided to leave them where they were for another 24 hours "just in case". 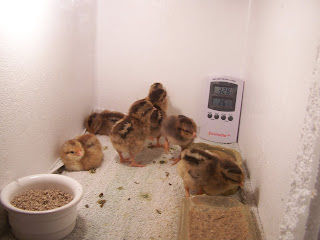 As nothing seemed to be happening in the incubator, I considered turning it off on Saturday evening - until I heard a tiny cheeping from the remaining good egg.  It was a couple of hours before it pipped but was a wonderful thing to see a little beak occasionally poking through the shell.  The last chick hatched during the early hours of Sunday morning, about 96 hours from the first egg pipping to the last chick hatching.  So now I'm the very happy "Mummy" of 8 Welsummer chicks.  6 girls and 2 boys.  Not all of them have names yet (I can't tell some of the girls apart!) but the boys are Rowan and Aspen, 3 of the girls are Petal, Snowdrop and Hebe.  They're all just so lovely, I consider myself to be a very lucky lady.
Posted by Maureen at 02:56

New chicks! I managed two hatches this summer...actually more like 2 and half, but they were my first ever!

I thought gathering eggs was the epitome of the "joy of chickens" but now I'm positive it's watching them hatch.

I'm very curious as to how you like your welsommers. Been thinking of adding some to my flock this spring. Are the eggs well and truly dark brown?

Again, congrats on the hatch!

Maureen
Stafford, Staffordshire, United Kingdom
Though I'm now "a retired lady" I'm still young enough to enjoy the simple pleasures in life as well as the more extravagant ones. I've got 3 grown up children, 10 grandchildren, a beautiful black cat called Ebony, 10 chickens, (sadly, now 8. Rose and Petunia have both gone to chicken heaven), a small veggie garden and an allotment. Love good food, good wine and good company. Hopefully the veggie patch and the allotment will help towards keeping me supplied with the first one :)